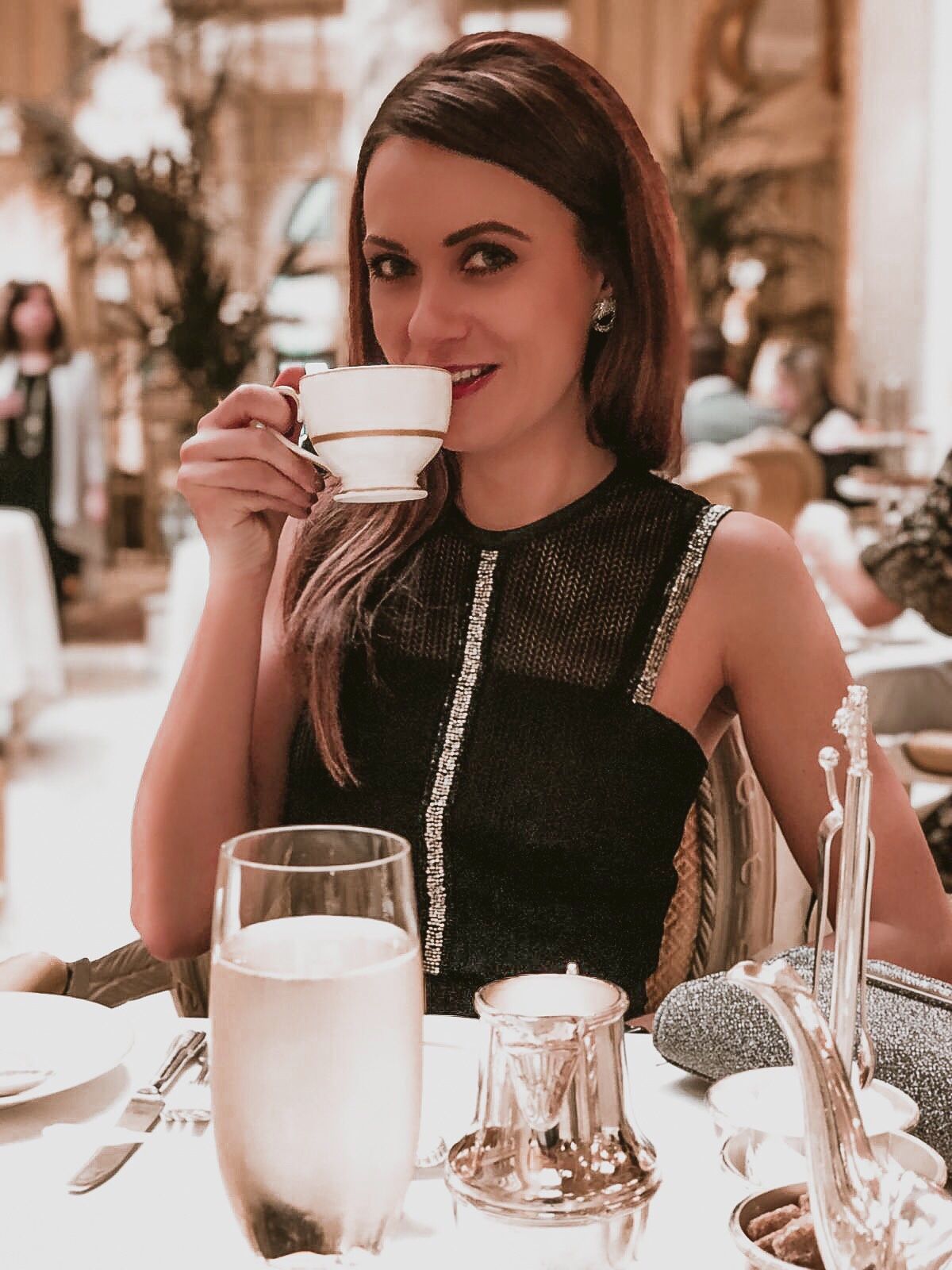 "If you’re blue and you don’t know where to go to
Why don’t you go where fashion sits?
Puttin’ on the ritz.
Different types who wear a day coat
Pants with stripes and cut-a-way coats,
Perfect fits…
Puttin’ on the Ritz"
The legendary Ritz Hotel located in the heart of London, makes for an exciting atmosphere of buzzing crowds. I have to admit to loving the energy created by crowds of people and so when an area is flooded with fascinating people, my day improves tenfold! 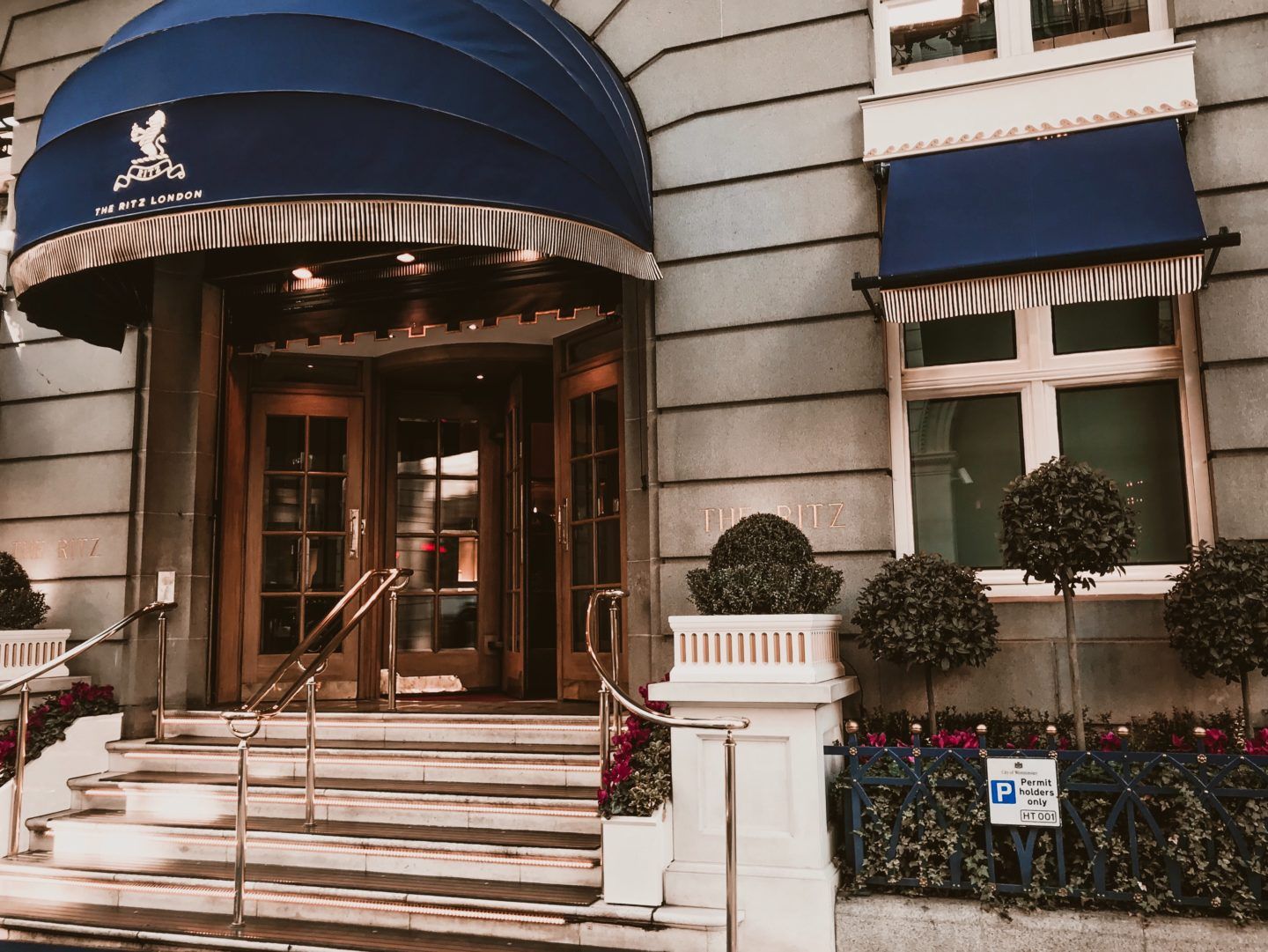 Inside the hotel is a very different matter and it could be considered a tranquil oasis in the middle
of the most vibrant city in the world.

Nothing can prepare you for when you step into The Ritz London for the first time. It welcomes you in with a warm, golden glow accompanied by the sound of grand pianos. The sheer grandeur, opulence and beauty of this legendary hotel is quite breathtaking.

Inspired by the French chateau style architecture, featuring Louis XVI décor and antique furnishings, the interior of The Ritz is just as impressive as the exterior, boasting a unique colour palette: salmon pink, rose pink, yellow and blue. Chandeliers are hung high from every ceiling, neo-classical décor is mixed with contemporary technology and the views overlook Royal Green Park and Piccadilly.

DID YOU KNOW?
THE RITZ OPENED 1906
When The Ritz first opened its doors on 24th May 1906, it was considered one of the greatest hotels in the world. César Ritz was the Swiss hotellier who gave his name to London’s Ritz (the Hôtel Ritz Paris existed eight years earlier).
In the early 20th century César Ritz’s innovations for the hotel were very unique for their time. Not only because of its remarkable architecture, fine chimneys and large copper lions standing high up on the roof, but also because each guest-room had their own bathroom, walk-in wardrobes, a sophisticated ventilation system, double glazing, and beds made of brass (rather than wood). No expense was spared on its opulent interiors and lavish furnishings. This was a big step in, what was clearly, the right direction.
Inspired words, songs and movies
In the early 1900s, the Ritz surname would become a word in its own right, with ‘ritz’ ‘ritzy’ and ‘ritzier’ entering common parlance, meaning ‘high quality, and superiority’.
The phrase ‘puttin(g) on the Ritz’ originates from 1911, and was later used by Irving Berlin in his 1927 song, and for the 1930 musical of the same name.
The Ritz London has been used as a filming location several times. In 1986, in Neil Jordan’s movie "Mona Lisa" and in 1999, Richard Curtis’ romantic comedy ‘Notting Hill’, starring Julia Roberts and Hugh Grant, featured several scenes shot at The Ritz. 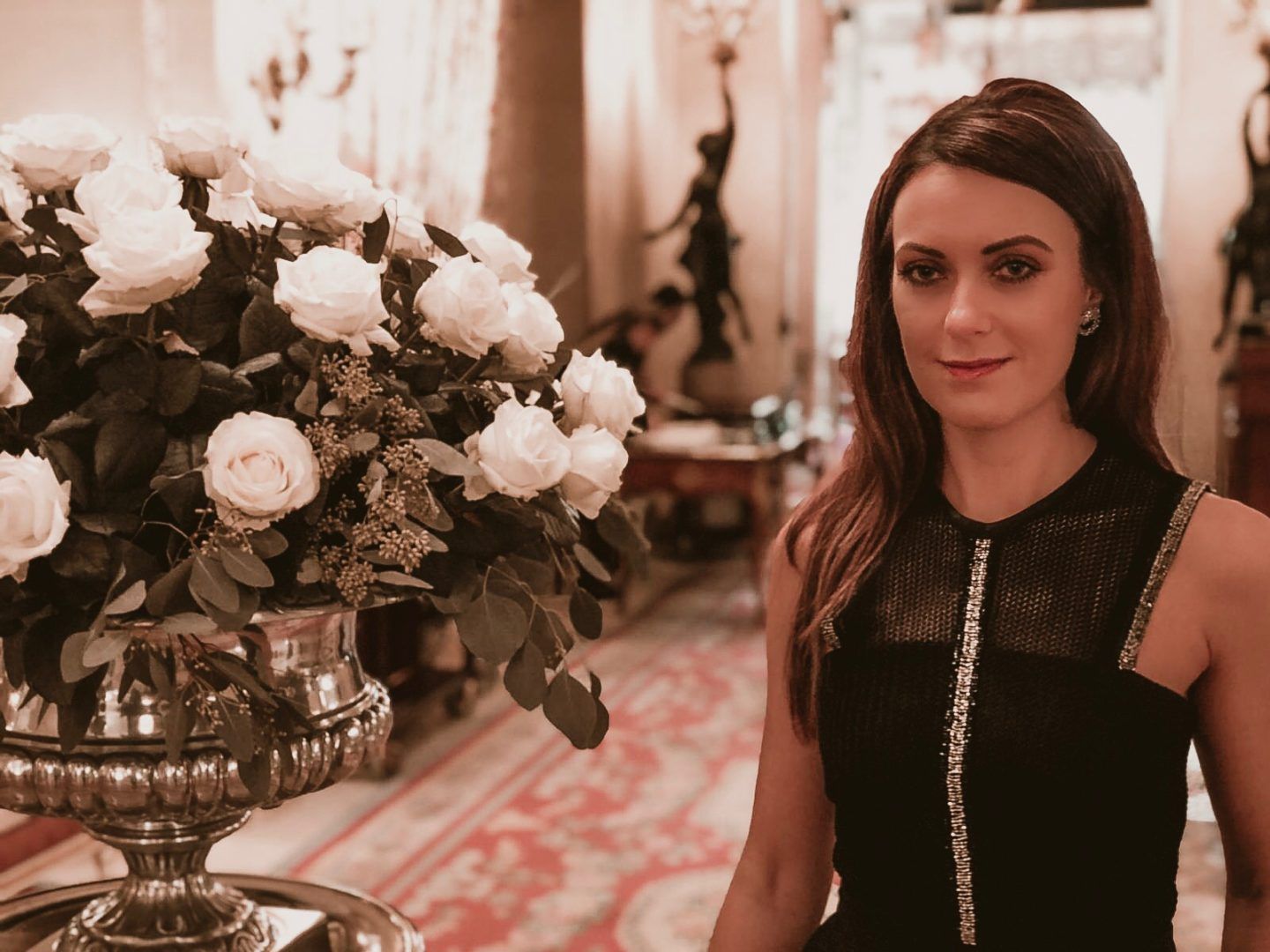 FAMOUS GUESTS
Quickly gaining a reputation as London’s most prestigious hotel, it attracts a host of both famous and fashionable guests.
During its early years, the hotel enjoyed the patronage of The Prince of Wales (the future King Edward VII) who was a loyal client of César Ritz and is reputed to have said; "Where Ritz goes, I go".
The Russian Prima Ballerina Pavlova danced there in 1912, the Aga Khan and Paul Getty had suites, and Winston Churchill, Dwight Eisenhower and Charles de Gaulle met in the Marie Antoinette Suite to discuss operations during the Second World War.
The Ritz also became the hotel of choice for Hollywood stars. Perhaps the most memorable celebrity guest came in September 1921, when Charlie Chaplin visited from America. He was mobbed by fans outside the hotel and required around 40 policemen to escort him into the hotel. The talented Nöel Coward wrote songs within the walls of this building including ‘Children of The Ritz’.
Jackie Onassis described The Ritz "it’s like paradise" and
Sir Roger Moore stayed at The Ritz when he was knighted in 2003
On 14 November 2002, HM Queen Elizabeth II hosted a party on The Prince of Wales’s 54th birthday in The Ritz Restaurant as a ‘thank you’ to her close family and friends for the success of her Jubilee year.
It was also the first hotel to which young, unmarried women were allowed to go without chaperones. 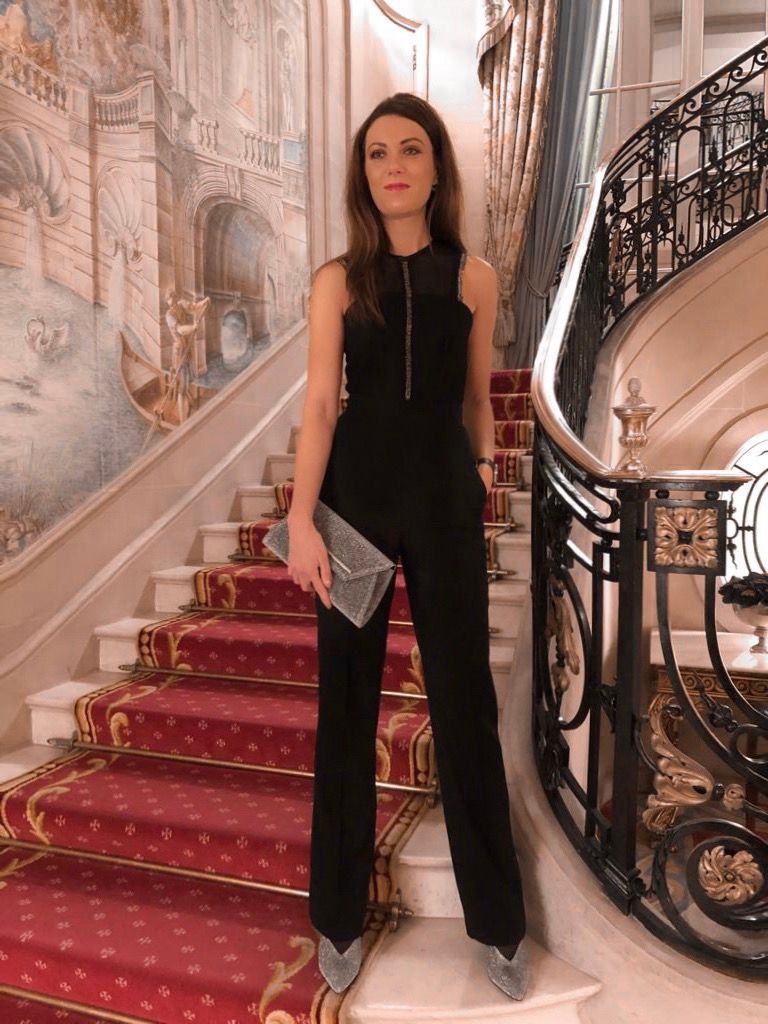 MICHELIN STAR 2016
In October 2016, The Ritz Restaurant was awarded a Michelin star in the Michelin Guide of Great Britain and Ireland 2017.

AFTERNOON TEA
If you are looking for exceptionally high standards and an exquisitely luxurious experience to celebrate a special occasion, you must indulge in a slice of one of the finest British traditions and take Afternoon Tea at The Ritz. 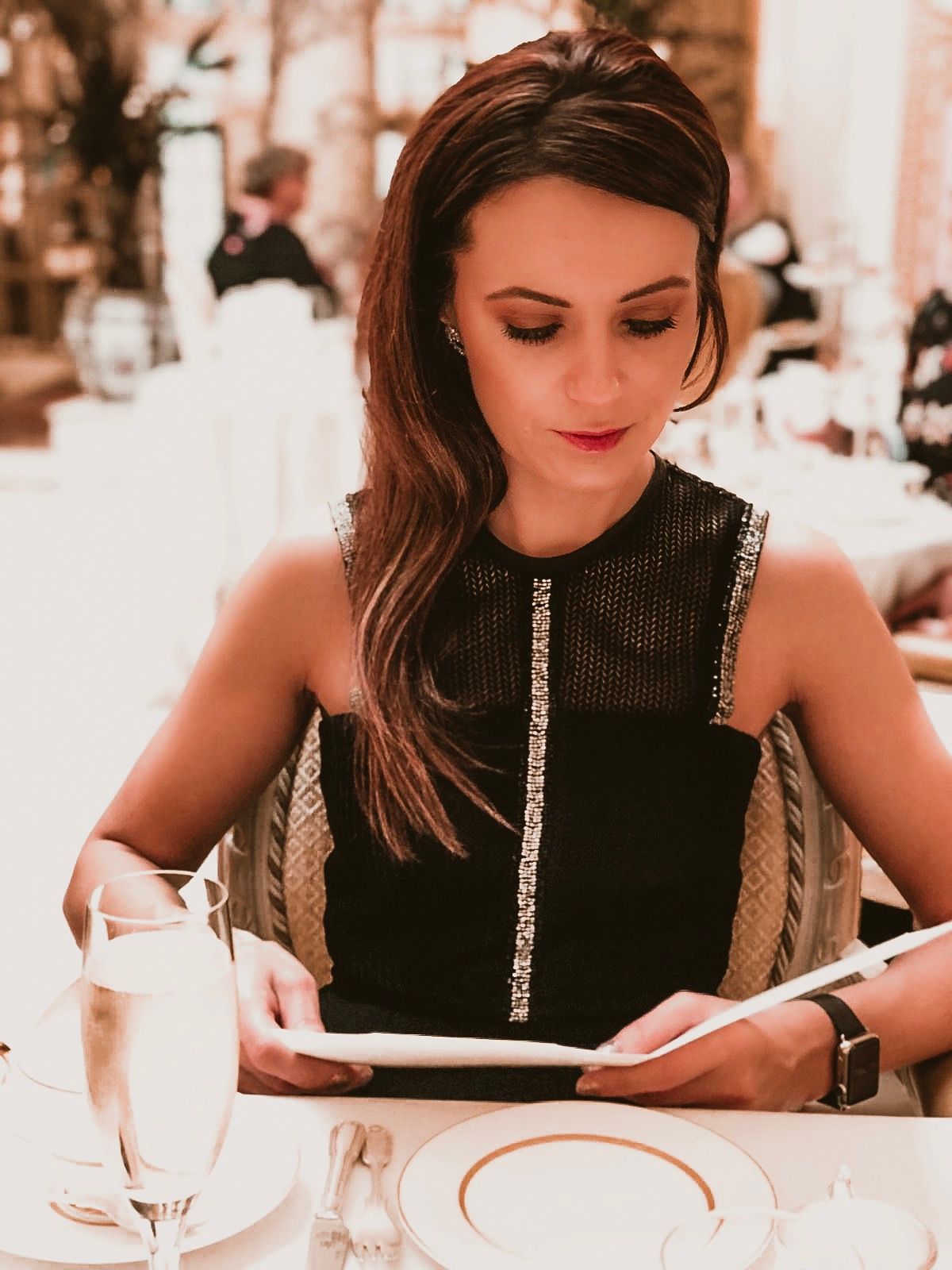 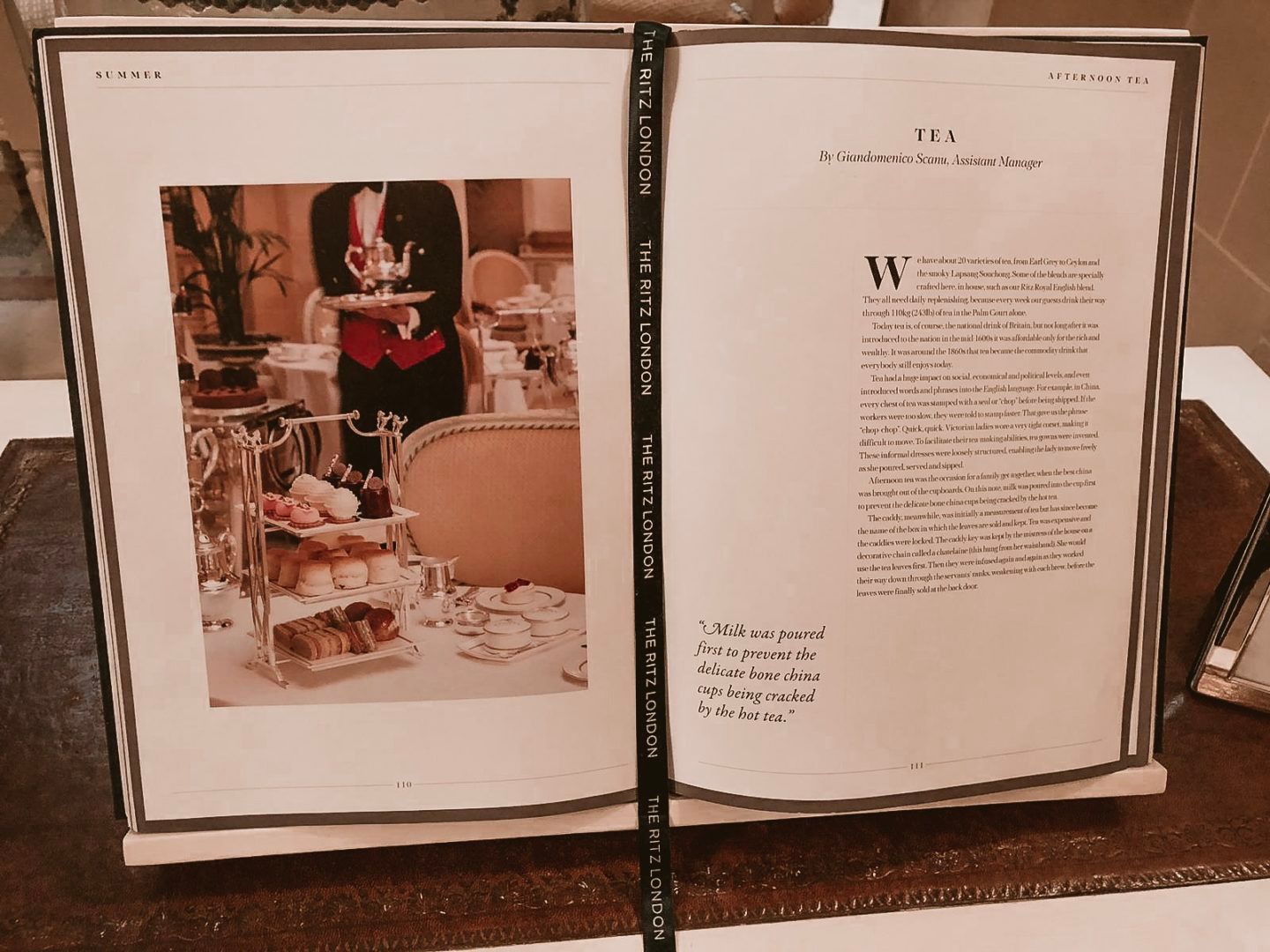 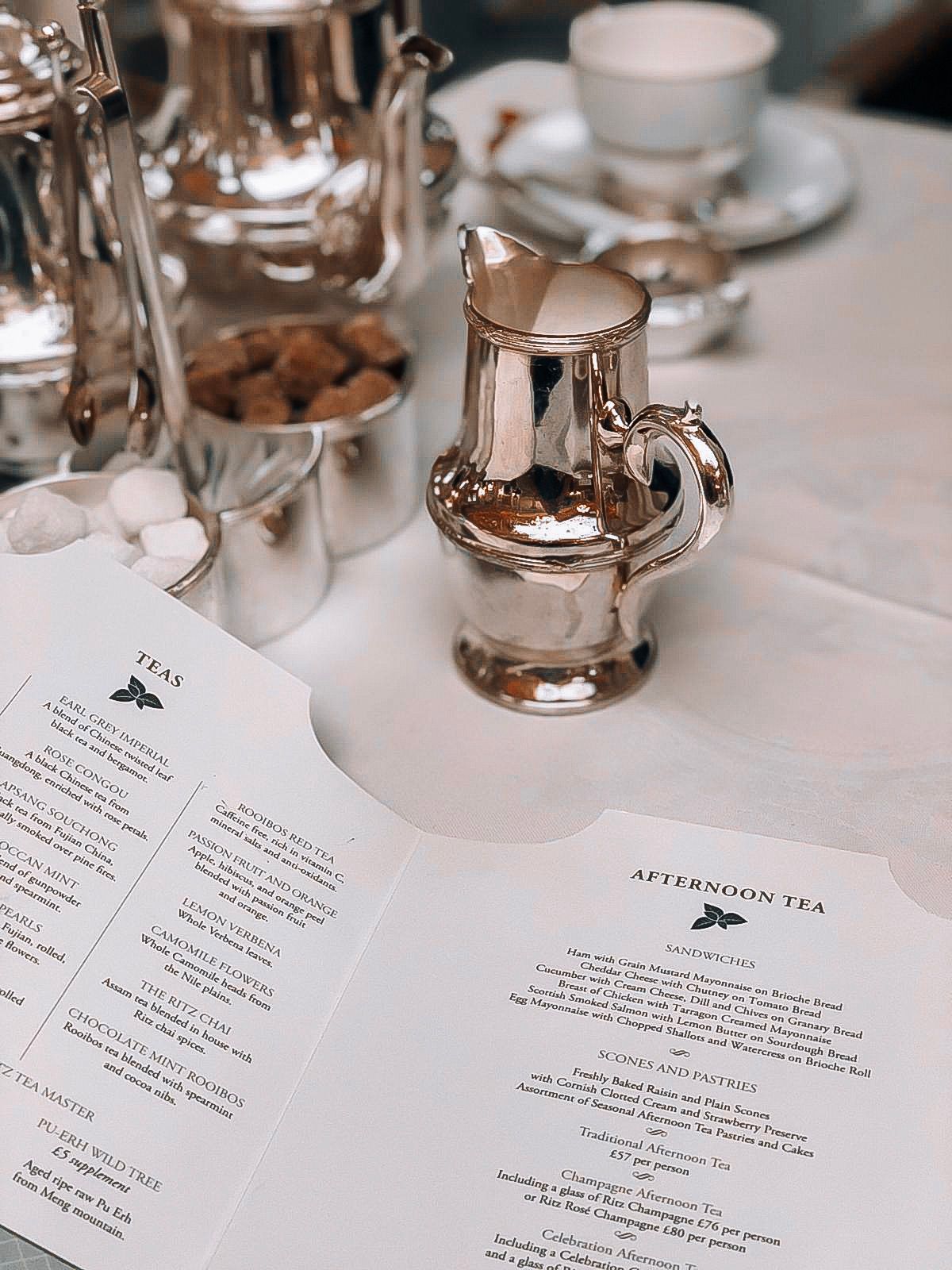 Served in the spectacular Palm Court with glittering chandeliers and elegant mirrors, complemented by a musical ensemble from a pianist and harpist.
The entire experience is seamless from beginning to end, with the afternoon tea being served within ten minutes of sitting down, complete with champagne, finger sandwiches, scones (with clotted cream and jam), sweet treats and extra confectionery. 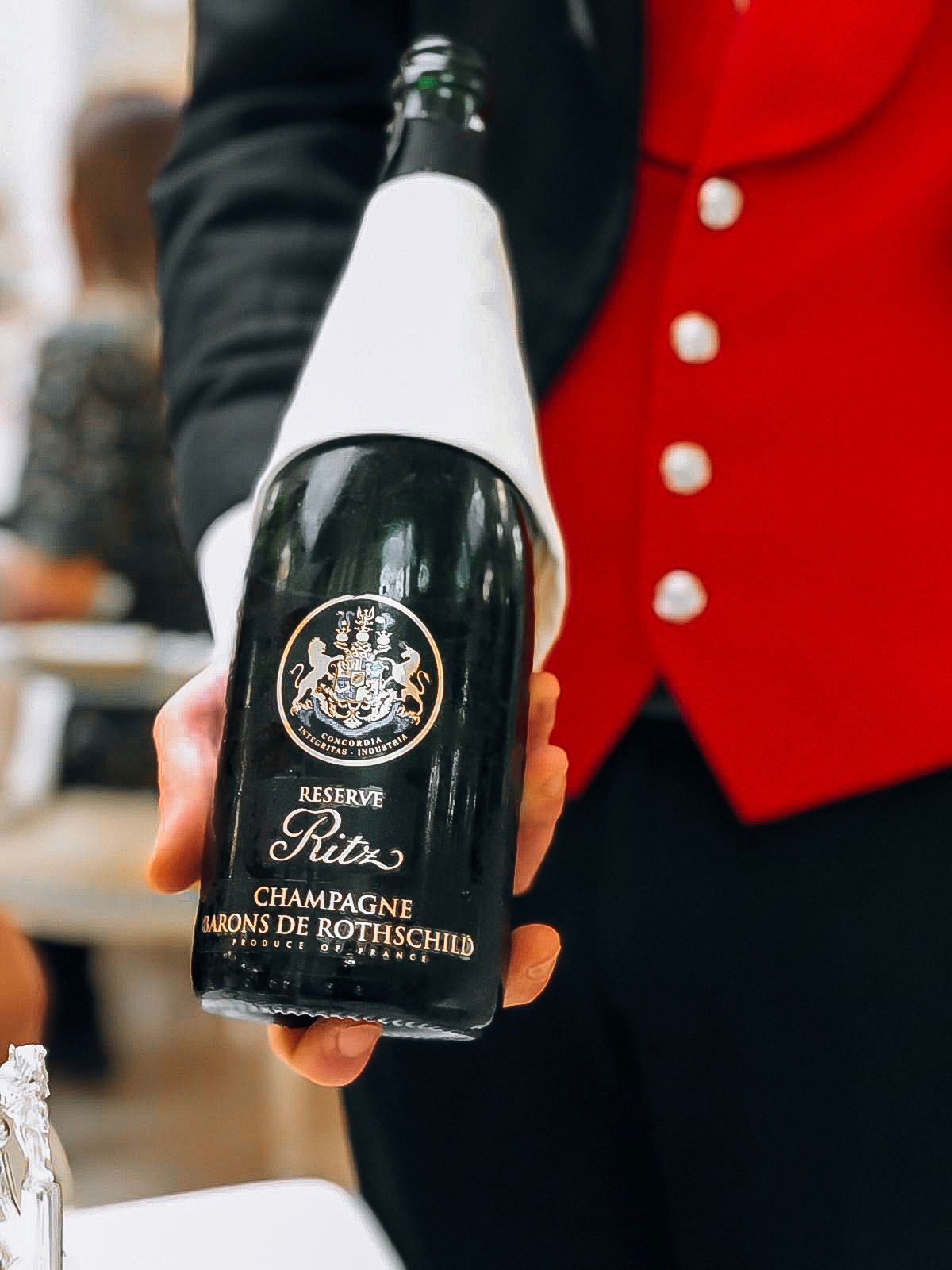 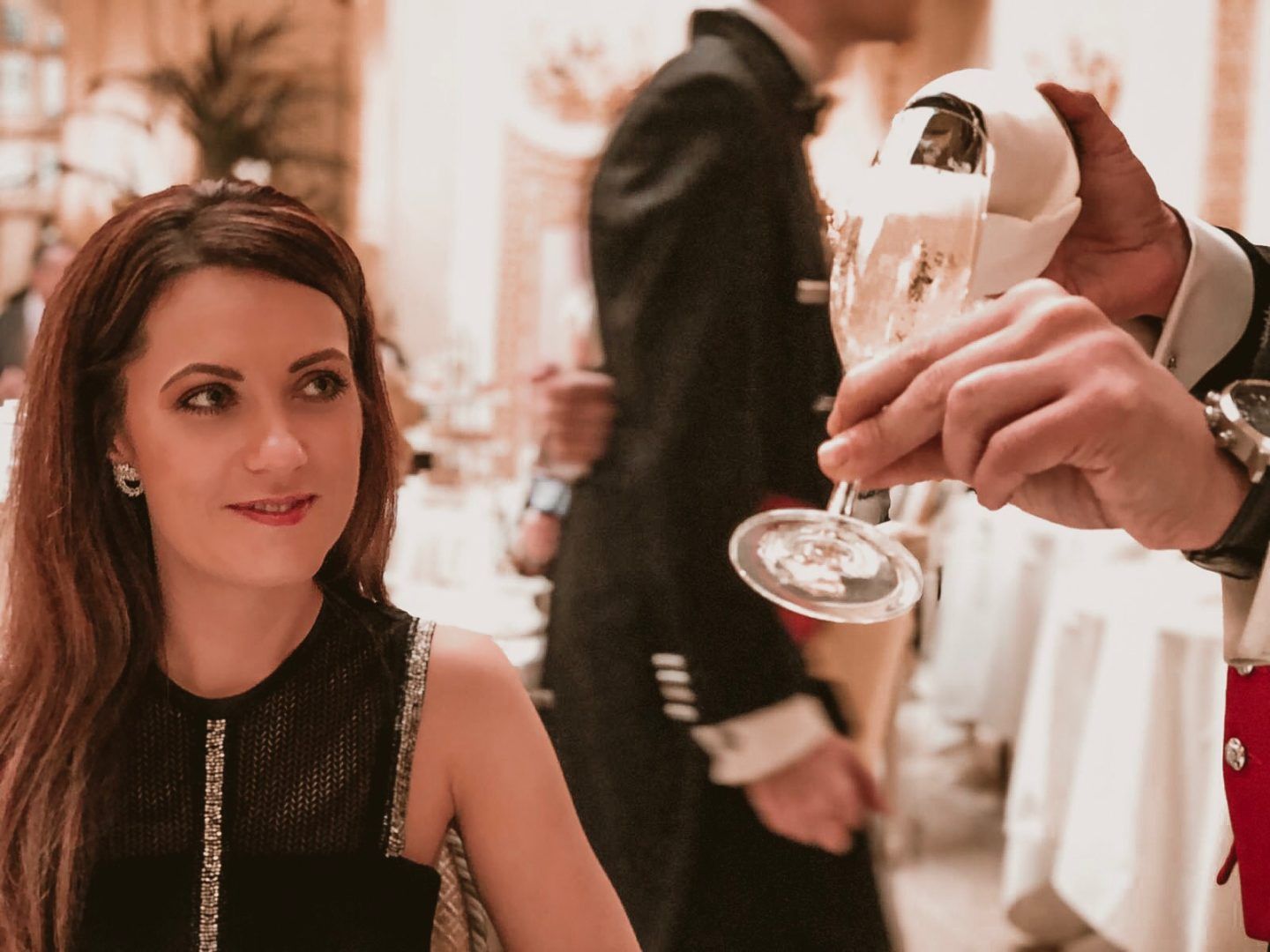 An exquisite selection of finely cut sandwiches, freshly baked scones with Cornish clotted cream and strawberry preserve, and a mouth-watering range of pastries and teacakes, which is replenished on request. Yes you read this right, it’s a lux edition of eat all you can! 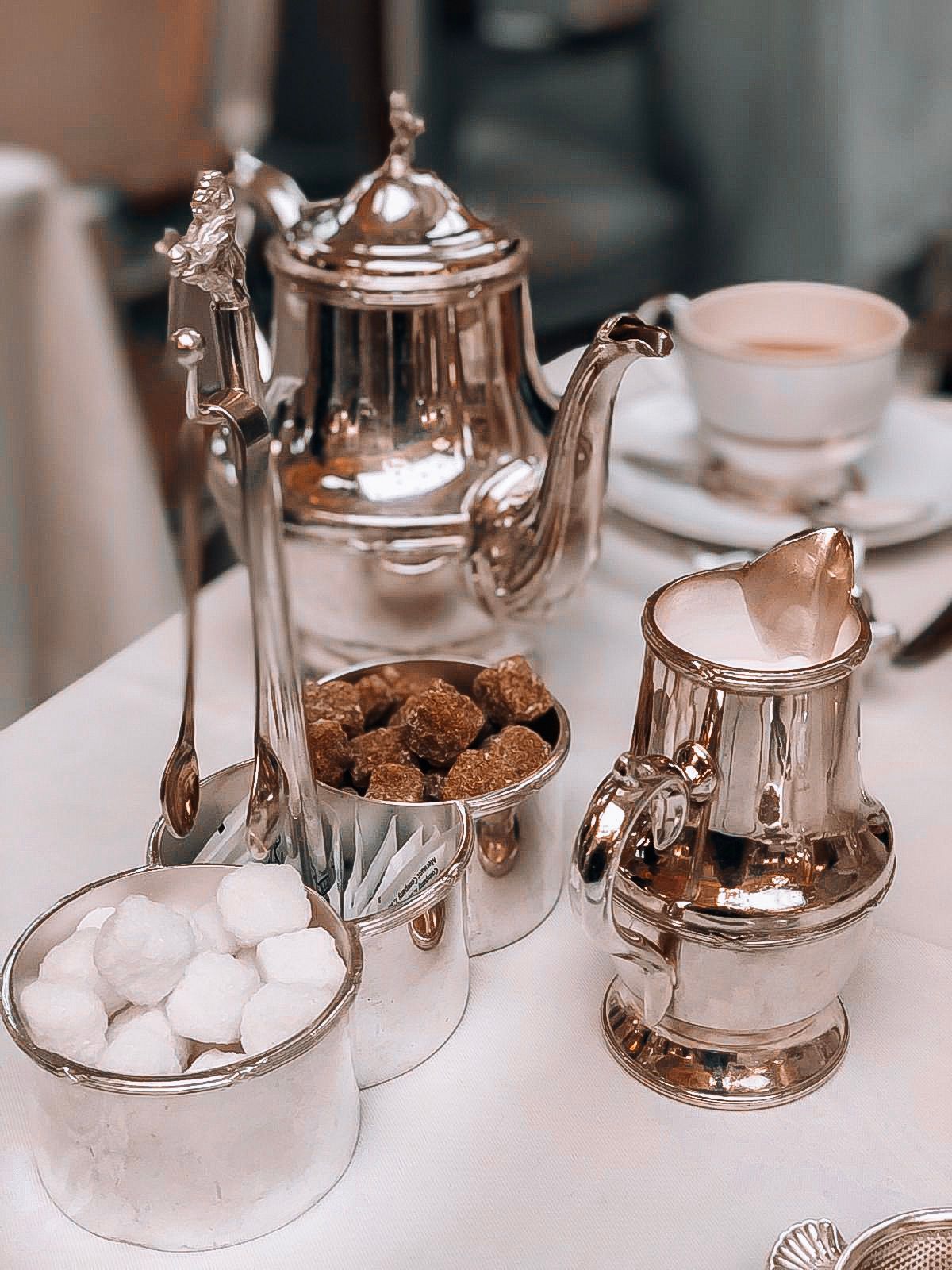 Now for the take away box of cakes and exquisite sandwiches to take home with you!  After you’ve finished working your way through the afternoon tea, you’re able to take anything left home with you.  Mmm. 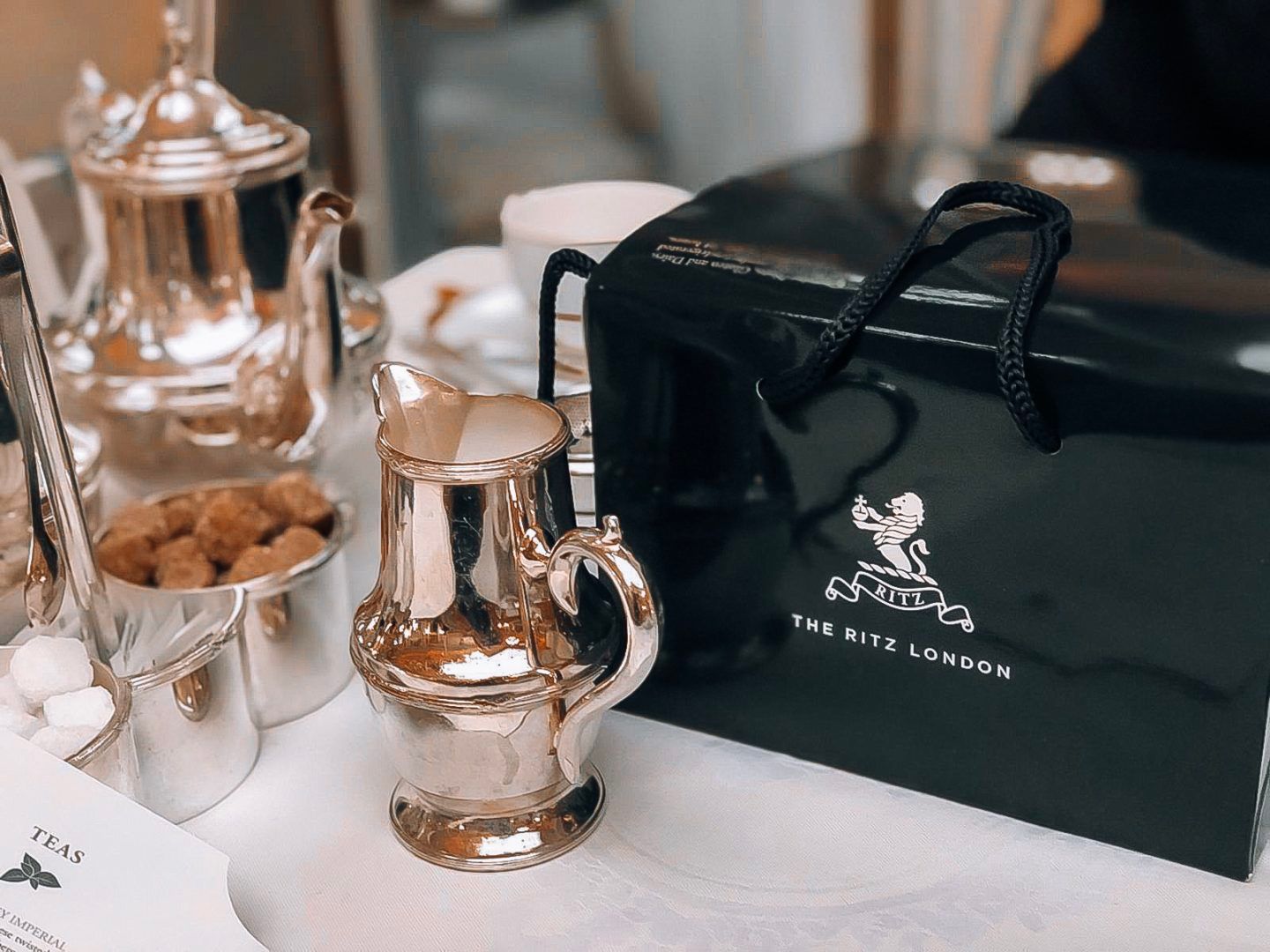 DEDICATED MAGAZINE
The Ritz has its own dedicated magazine. You can read it here. If you would like a physical copy, you might have to be a guest, or at least buy a cocktail.
I hope you enjoyed getting to know the famous London Ritz.
If you’re also a superfan of indulging in the occasional afternoon tea here and there, be sure to take a peek at the unforgettable Ritz experience.
What is your place/idea to celebrate something special? Let me know in the comments below. 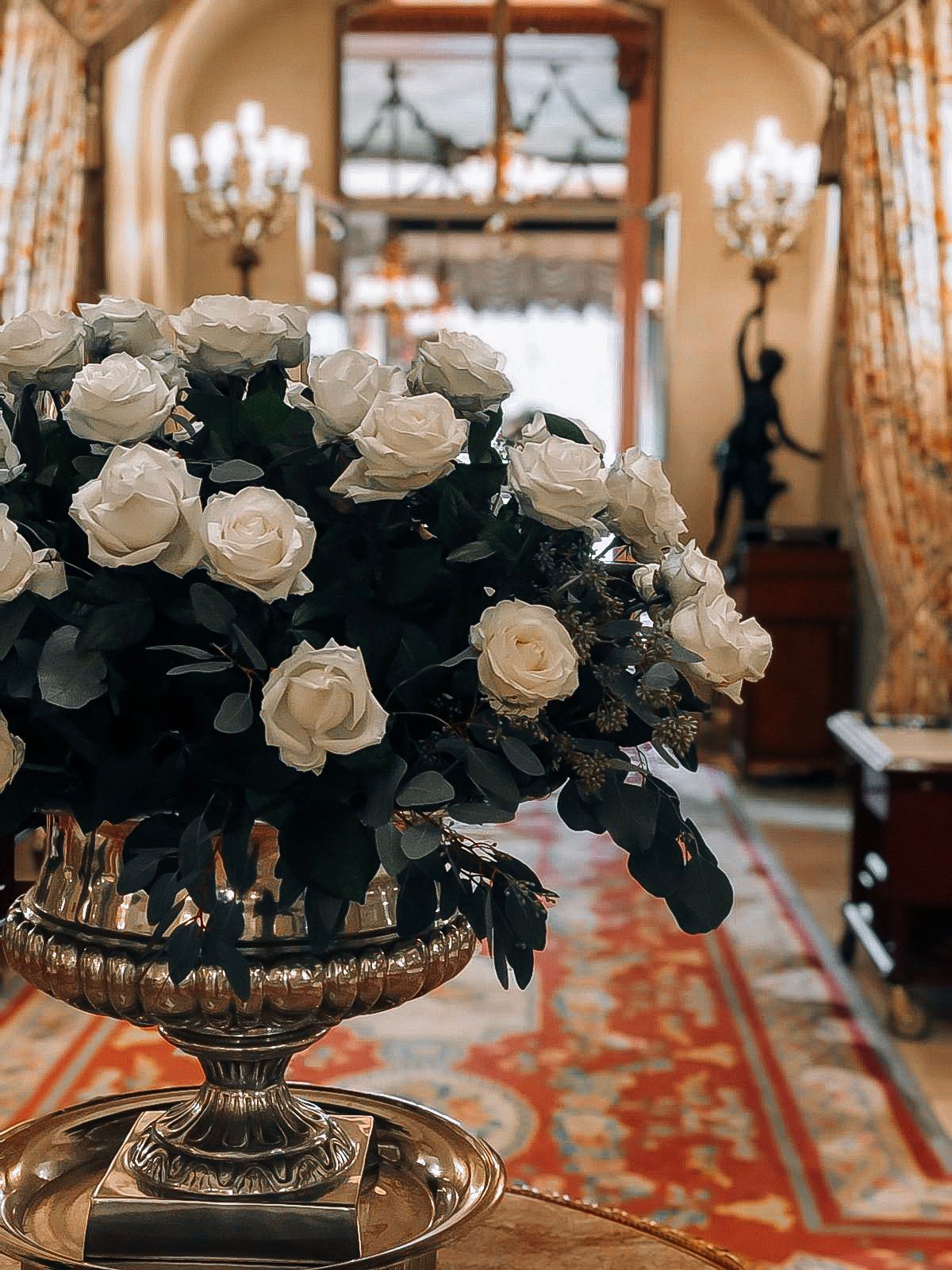 Credits
Photography by Bloggsy
BLOGGSY is finally here with its amazing collab tools to build your influencer business!
1) connect with other amazing bloggers around the world
2) swap contacts, ideas, tips and create together
3) promote your skills and services and monetise these
4) earn money with a huge referral scheme
By Women Fashion Trend 2020