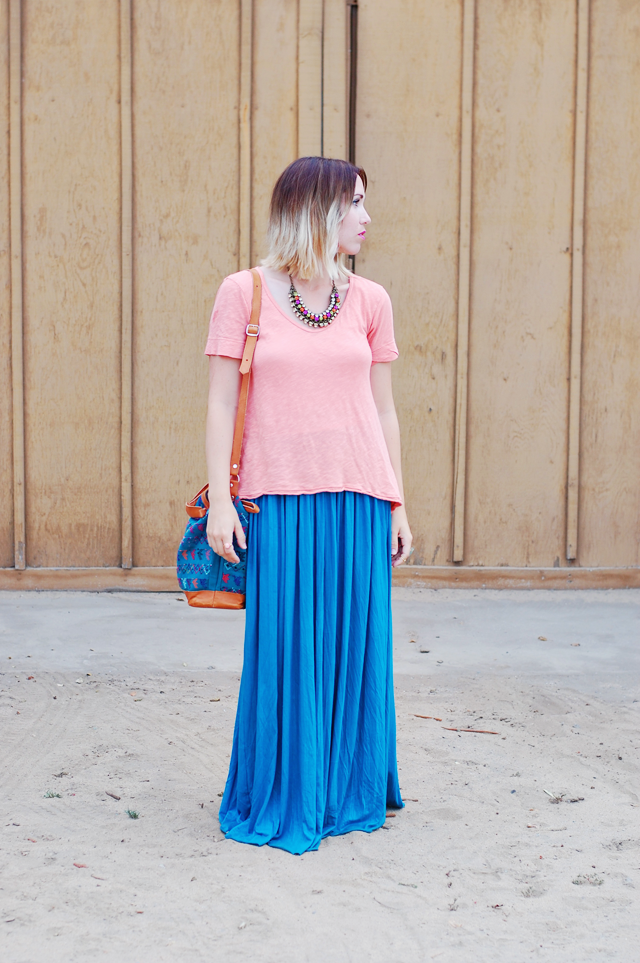 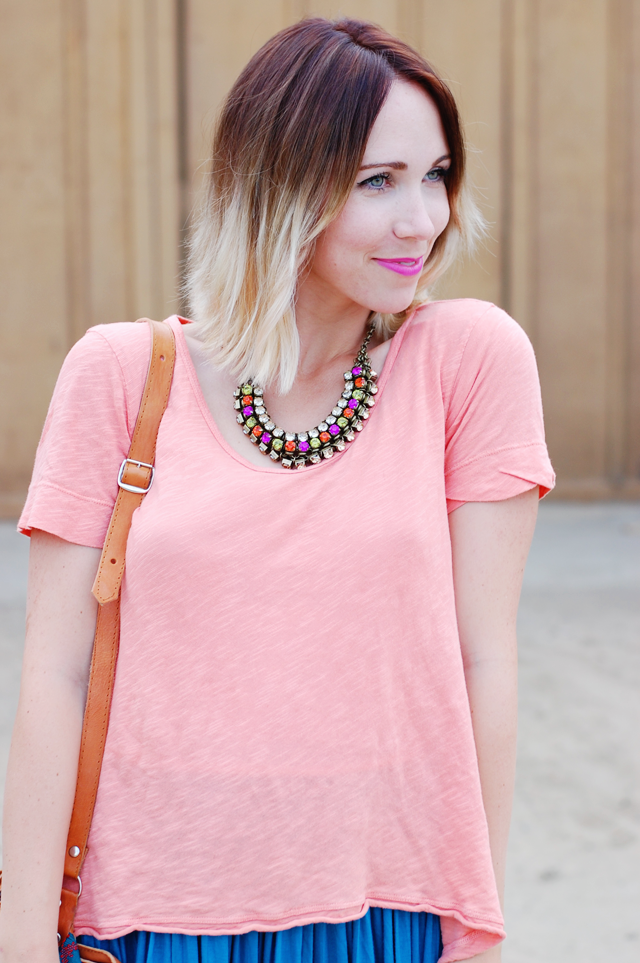 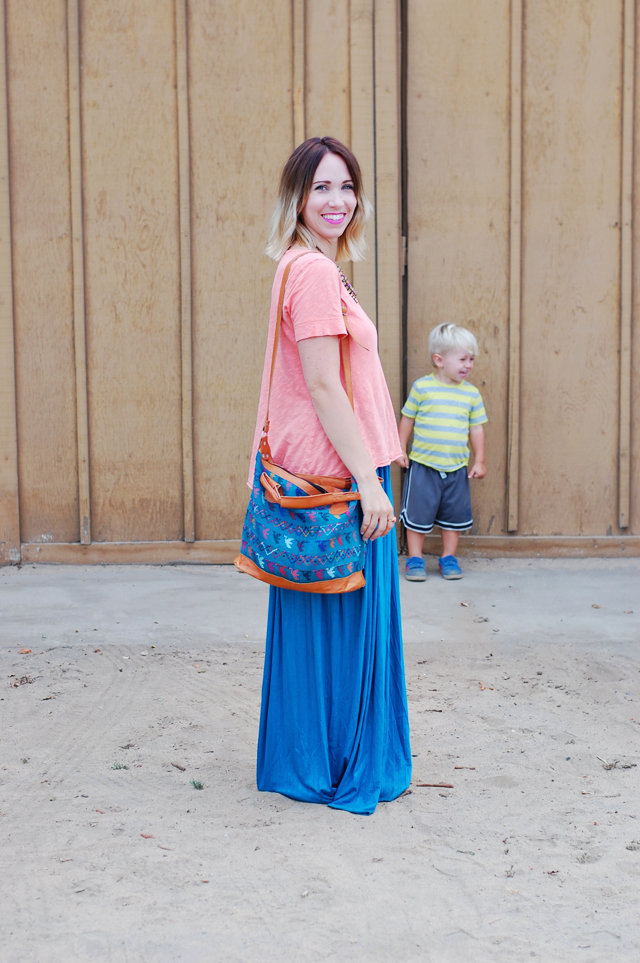 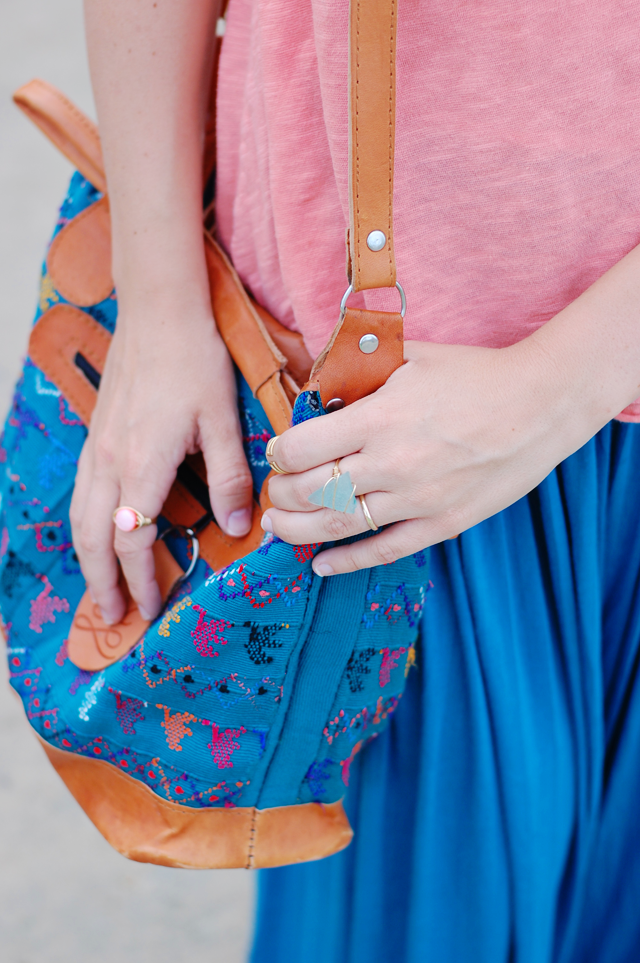 Handbag: Humble Hilo
Shirt: similar
Skirt: similar
Rings: Seamaid Market and Madewell
Necklace: similar
Sandals: Target
Lips: Revlon ColorBurst Matte Lip Balm, Showy
1. So, The Bachelorette. I'm a big fan of Andi. I like her spunk and frank honesty, but I was kind of left yawning over last night. Her selection of guys to choose from was meh, and it always turns into the same old game of, "She's mine! No, she's MINE!" between the dudes in the previews. However, I did really like the guy she gave the first rose to — I think his name is Nick? I bet you one million dollars he makes it to the final two! And I also think Chris, the hot farmer from Iowa, will make it far. I still don't get why she chose the meathead that is basically a cross breed of Macklemore, Sean Lowe and Juan Pablo. His name is Cody, but I will be calling him Macklemore Shuan Pablo (see what I did there?).
2. Fact: Sharks and rays are the only animals known to man that don't get cancer. Scientists believe this has something to do with the fact that they don't have bones, but cartilage ( source).
3. Luke is an excellent photo bomber.
4. I often think about of how I would escape from wildly outlandish situations where there is only a 0.0001% chance I would ever be caught in that dilemma. The one I've been thinking about recently is if I could survive crossing a vast desert with Luke and Wes. This all started after I watched the movie, The Way Back, where a group of men escape the Gulag in Siberia and have to cross the Gobi Desert as part of their trek to freedom. I would have nothing other than the clothes on our backs and a baby wrap. Here is what I would do: I would carry Wes in the baby wrap (obviously) on the front, which would protect him from the sun as much as possible. I would attempt to sling Luke onto my back and wrap my shirt around his head so he wouldn't get burnt, as well as my head. The kicker is how we would survive with no food and water, which leads me to this next question. Is it possible for a woman to sustain herself with her own breast milk? To keep a full milk supply you need food and fluids, so I wonder if it would work to drink my own milk for a source of nutrients, so my milk would continue to produce as a source of nourishment and hydration for the boys, and how long it would last. Basically, I think way too much about things that are ridiculous. (But apparently I am not the only one!)
5. Would you rather have a honey dispensing belly button or pencil sharpener nostrils?